In the park, the Convention Centre, designed by the architect Mario Bellini, with its glass and steel architecture, and inspired by the design of the old Larian greenhouses, creates a perfect balance between history, elegance and innovation. The building, with its over 10,000 square-meter area, consists of a circular pavilion and three different wings: Lario, Cernobbio and Regina, which can host more than 500 stands; it also features 28 meeting rooms, with a capacity of 50 to 1,500 seats.

The central pavilion structure has been designed for the hosting of large events (up to 1500 participants). Its circular structure is characterized by excellent acoustics can host not only national and international conventiones, conventions, large conferences and films, but also shows, concerts and DJ sets until late at night, upon request. The three side wings can host conference rooms, conference buffets and rooms for business negotiations.

Each wing can be used independently to meet the needs of each customer in terms of space and service. The side windows of the central pavilion can be totally opened, and allow for the display and presentation of products of considerable dimensions. All the windows can be completely dimmed for perfect video projection, presentations or special effects. 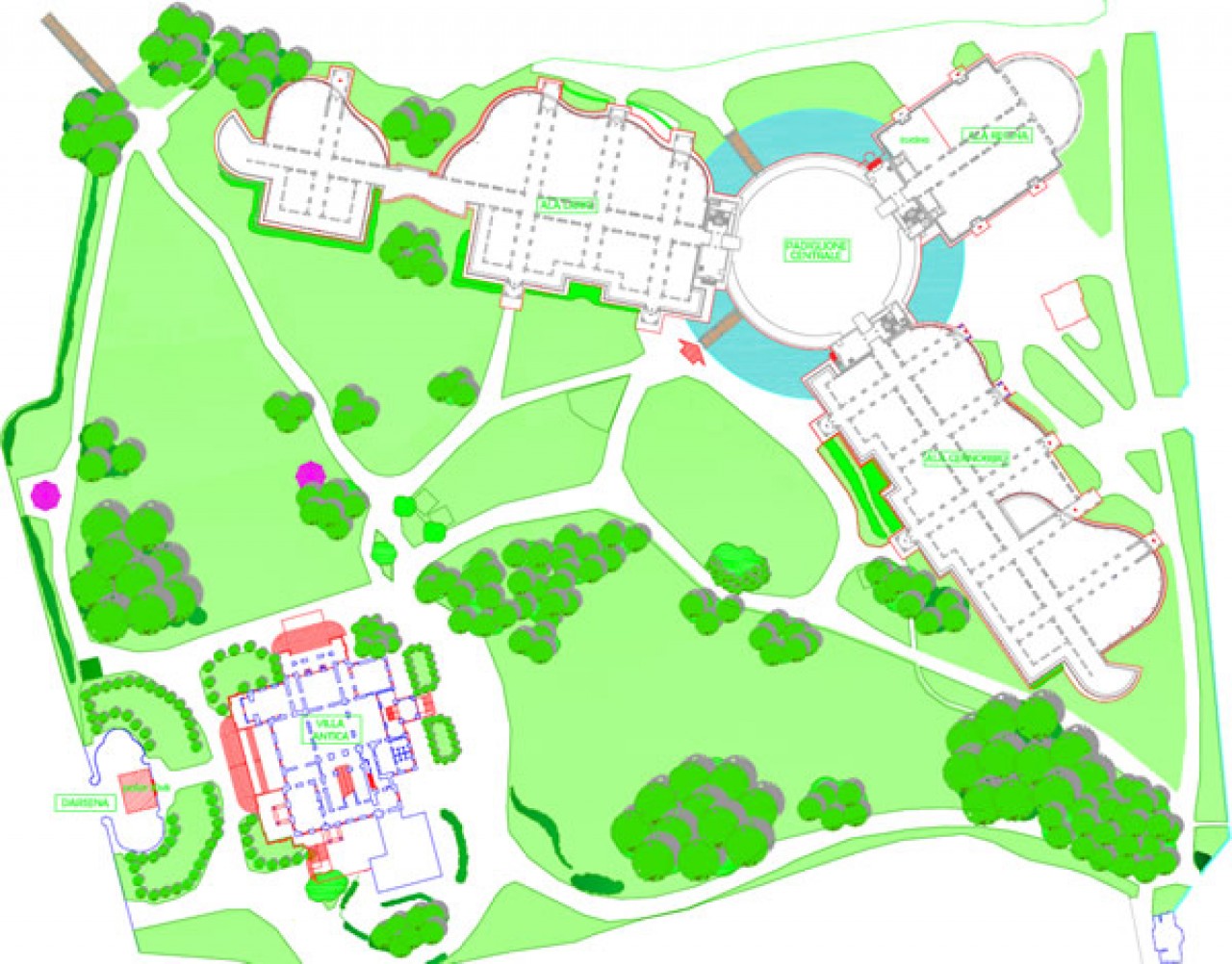 Villa Erba staff provides highly competent services for all aspects related to logistics, organization and entertainment, involving high-level artisan companies in the areas of Como and Brianza.
With its presence on the territory, consolidated in the years, Villa Erba is able to offer the perfect mix of suppliers to guarantee impeccable service, with careful attention to detail.
Each event is "customer tailored": it is designed and customized according to customers' needs and requests.
Download the pdf with the map of the area in 1: 500 scale

From Erba to Visconti families, a historical venue for prestigious events

Villa Erba, an architectural jewel built in the late nineteenth century, was the holiday residence of the Erba family. Here, the great film director Luchino Visconti spent many summers, and the rooms of the villa inspired the scenery of some of his famous masterpieces.

The villa, with its frescoes, preciously carved ceilings and mannerist-inspired rooms, is nowadays the perfect venue to host unique events.

In the historical Villa, prestige and worldliness coexist in total harmony: it can host both formal conferences and the most glamorous parties, and thanks its position the music can go on until late night.

Sceneries of the late nineteenth century

Each window is like a picture... always different views turn every room into a small masterpiece. The hall is the heart of the Villa, spectacular and bright, perfect venue for aperitifs, concerts, press conferences, conventions, seminars, parties and gala dinners.

The rooms on the ground floor are surrounded by terraces, and a suggestive lake garden for lunches and dinners en plein air. Each room has its own atmosphere and can be customized with ad hoc settings. The entire ground floor, with its entrance hall and 5 rooms, can accommodate up to 450 seated people.

The rooms are the perfect space to host various types of events: in the old ballroom, up to 500 people can dance, while the reading room can host 80-people dinners. On the first floor, the bedrooms have been transformed into rooms that can be equipped as executive offices and meeting rooms. The Villa has a wardrobe and functional kitchens.

Rich in history, culture and genius

Originally a monastery, Villa Erba was bought by the Peluso family, who already owned the neighbouring Villa d'Este.
The ownership then passed to Luigi Erba, Carlo Erba's brother and heir, one of the major pharmaceutical manufacturers of that period, who had a villa built to represent his family's status and prestige.

The project was entrusted to the two most popular architects of the moment: Angelo Savoldi and Giambattista Borsani. In those years, the Erba family hosted great artists, and in life the villa was culturally and socially intense.

Inherited by her daughter Carla, who married in Cernobbio the Duke Giuseppe Visconti di Modrone, the Villa the summer holiday's home of their son, the film director Luchino Visconti.

The heart of Villa Erba preserves a piece of the Italian cinema history: Luchino Visconti's rooms.
In this environment, the profound bond between the film director and his Villa lives on. Here, the film Director spent the long, happy summers of his childhood, with his mother and brothers.

The historical rooms dedicated to Luchino Visconti can be visited by appointment and can become a special 'gift' to offer your guests.

In 1972, Luchino Visconti decided to retire in the Villa where he completed the editing of "Ludwig", one of his greatest masterpieces.

Villa Erba's centuries-old park is a living part of the exhibition complex: a rich botanical patrimony, with various species of rare, exotic and centuries-old ornamental plants, embracing the old Villa and the Serre. In each season, the vegetation offers suggestive glimpses, some of which directly overlooking the lake, with ever different shades of colour throughout the year.

In the area surrounding the Convention Centre, you can admire the American Maple (Acer negundo), introduced in Europe in 1688; the Indian horse-chestnut (Aesculus hippocastanum), used both as an ornamental plant in the avenues and in groups, to create fresh, shaded areas; the Himalayan cedar (Cedrus deodara), which originated in the western slopes of the famous Asian peak; the Lawson Cypress (Chamaecyparis lawsoniana), originally from the United States, already used in Italy for the reforestation of some southern rural areas; and the common beech or Western beech (Fagus sylvatica).
Among the shrubs, there is the Ligustro (Ligustrum japonica / Ligustrum ovalifolium), already mentioned by Virgil and by the Roman naturalist Gaio Plinio Secondo: its common name is privet or olivella. Then, you can smell the scent of the evergreen Osmanthus (Osmanthus fragrans) that comes from China and Japan. But the most striking beauty certainly belongs to the great magnolias (Magnolia grandiflora) which punctually give the park an abundant and showy flowering, with colours that vary from one species to the other.

If the Spring offers such magnificent flowers, the Summer is inundated of the intense scent of the Linden trees (Tilia), a tree native to the northern hemisphere, which name derives from the Greek ptilon (feather) for the shape of its leaf that facilitates the wind spread of its fruits. Another magnificent ornament in the garden is that of the weeping willow (Salix babylonica), with its particular shape. Among the protagonists of the centuries-old park we cannot forget the Spanish bog oak (Quercus palustris), which tolerates pollution well and is transplanted easily: a strong tree, as we use to say.
Given the proximity of the lake basin, the Cypress of the marshes or Bald Cypress or Tassodio (Taxodium distichum), a water conifer originating from the United States, found its ideal place, as it is suitable for damp and frequently flooded places. Finally, around the flower beds and walkways we find the Yew (Taxus baccata), treated according to the rules of topiary art, with geometrical and ornamental pruning.

Next to the old Villa, in addition to some plants already mentioned, there is the Japanese maple (Acer palmatum), from the Far East (Japan, Korea, Taiwan and China), with leaves of numerous shades of colour from purple to green.
Among the most exotic species, there are beautiful specimens of Celtis occidentalis, commonly known as hackberry, nectletree, sugarberry, beaver... a large tree native to North America. The park also features fruit trees such as the Lotus or St. Andrew's tree (Diospyros lotus), which produces spherical berries of about 2-3 centimetres in diameter.
The Ginkgo biloba is an ancient tree whose origins date back to 250 million years ago, and for this reason it is considered as a living fossil, the only surviving species of the Ginkgoaceae family.

As evidence of the great variety of species and orders, there is also the Holly (Ilex aquifolium), also known as Butcher's broom; its leaves are shiny dark green, with a variety of white, cream or variegated yellow, and it has fruits that offer a decorative contrast. Among the shrubs we find the crape myrtle (Lagerstroemia indica), a small tree originating from south-eastern China and growing spontaneously also in Java, Laos, Thailand, Vietnam and Cambodia. Between the eighteenth and nineteenth centuries, a fascination for the exotic countries ever present in the stately homes, and a park rich in species from distant lands expresses a cultural and genuine interest for new, unknown worlds.

Also the laurel (Laurus nobilis), a very well-known aromatic and officinal plant, a metaphor of honour and nobility, which, perfectly pruned, grows in perfect harmony with all the elements of the landscape.
Finally, two species that are particularly linked to our territory: the spruce (Picea excels), a tree of the Pinaceae family, widespread in the Alps and throughout Europe which, with its straight trunk and conical crown, can reach a forty-meter height; and the aspen (Populus tremula), a robust tree that can reach up to three / four meters in diameter, and a height of 25 meters.

The Galoppatoio (the horse track)

The Galoppatoio (horse track) is a wide, flat, fenced, green area. Its wide space, located inside the park with access from the road, continues towards the lake. It can be set up with temporary structures and infrastructures suitable for hosting concerts and sporting, cultural and commercial events.
The area can be used independently from other events, to expand the usability and parking space.
There are two helipads allowing helicopters to access the area.